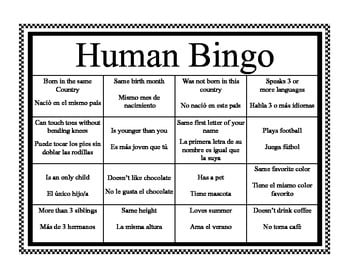 The idea of the game is to interact with group members to discover the person whom the statements written on the sheet are true about. In order to do this, participants have to walk around the hall and speaking in a whisper, they have to find someone who is affixed to any of the statements on his sheet. The person signs on the right square and both continue searching.

There are up to 20 people in this game who interact with each other through various questions. Each participant must have a paper in which the same statements must be written. There are several statements written on these charts. Although, you can adjust the affirmations according to your group. Examples of the statements: He likes to cook, travel to countries in Europe, lives with other family members, reads the newspaper regularly, has his own laundry, has more than two animals, plays a musical instrument, parents or grandparents were born in – another country, can speak in several foreign languages.

In Bingo’s human game, – You need to be very open to communication and to socialize with people. – Be the first to interrogate the group of people you will be in touch with. – Read the affirmations carefully so that you do not hear and go to another person quickly and look for whether the statement is for him or her.

The Benefits Of Playing This Game:

This game helps the participants to:

1.      Develop excellent team spirit and good communication skills.
2.      Increase interest and curiosity about other colleagues.
3.      Give a list of characteristics of the group to which he/she belongs.