Your work team building is right around the corner? Or is it a backyard party that you’re throwing and you’re looking for ways to make it more… lively? You’ve come to the right place! Games with water balloons for adults are the perfect mix if you want to have a blast while stirring up the players’ competitive spirit.

Games with water balloons for adults are a great option for those summer days when the outside feels like an oven. Picnics, family gatherings in the yard, get-togethers on the beach – all these are proper contexts. However, playing them indoors… not such a good idea since things tend to get ‘a little bit’ messy. Let’s have a look at what we’ve prepared for you today: Top 5 games with water balloons for adults.

We will begin with our top choice. Split the players into 2 equal teams and assign a team leader. Everyone should wear eye goggles. One team should stand in a circle, holding a water balloon, while the other team should stand outside the circle. Once you blow the whistle, the game begins. One member of the team standing out comes inside the circle. The team leader standing in the circle must ‘hit’ the intruder with a water balloon. If he misses or if the intruder’s able to dodge and avoid getting hit by the balloon, the player standing next to the team leader gives it a try. When the outsider is finally hit, another of his teammates gets to enter the circle.

The goal of the game is to be played as fast as possible. ‘The final battle’ goes on until the team standing in a circle no longer has water balloons. The game is won by the team who hits more players of the opposing team.

2. The sunrise and the sunset

Split your players into 2 teams and form 2 lines. The players in each team should be standing one after the other. One team will get a red balloon – ‘the Sunset’, and the other will get a yellow one – ‘the Sunrise’.

*Tip: Increase the level of difficulty by handing out more than one balloon to each team. It will be harder to pass several balls fast, without letting them fall and burst.

Set a timer for 20 seconds. Once you blow the whistle, the teams must pass the balloons back to the next player, until they reach the end of the rows. But pay attention: the team with the yellow balloon must do that by raising their hands and passing the object behind their backs, while the team with the red balloon must do that by passing the object between their legs. The last players of both teams must exchange balls and start passing balls again in the opposite direction.

The charm of this game is speed. It can be quite challenging for the teams to pass the water balloons fast, while also making sure they don’t drop them. If one participant drops the ball, the entire team loses.

Start by setting up the game. Pull the rope along a wall and fix the water balloons on it by using some strong clothespins. Make sure that there’s at least 1 meter between the balls. Hand out 7-10 darts to each player. Blow the whistle. Every player must throw darts in turn, trying to hit as many water balloons as possible!

Ask all the players to stand in a circle. Give one of them a balloon filled with water and have them throw it to another player. They can choose whomever they want. The chosen player must catch it and throw it to another player as fast as possible. This is how the game keeps going until it falls on the ground and bursts. The player who failed to catch it or in whose hands the balloon burst must sing a song. You can play this game with water balloons for adults as long as you wish.

But stop right there because this is not it. You also have to clean up everything and you can turn that into a fun activity as well. Come up with a reward and ask the players to help you. Whoever picks up the most balloon pieces gets to win the sweet prize.

This is one of the best games with water balloons for adults you could choose if you’re about to throw a party. You could even consider it a fun drinking game for adults if there’s some booze involved, but also a great ‘Minute to win it’ game!

Start by splitting the players into 2 teams. Stretch 2 ropes – one for each team – between two posts. Use a string to tie all the water balloons to the ropes. A player from each team is blindfolded and they are given a stick. Here comes the fun part. The second you blow your whistle, players have to burst as many balloons on their rope as possible, in less than a minute. When the time’s up, they must pass the blindfold and stick to one of their teammates and the game keeps going. The winning team will be the one that manages to burst the most water balloons.

If you’re looking for activities that involve adults, balloons, and fun, but you’re not very happy with the ‘water’ part, we have another article on eTeamBuilding that might suit your needs: iconic games with balloons for adults. Check it out and let us know what you think!

PrevPreviousIconic Games With Balloons For Adults  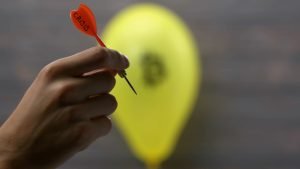 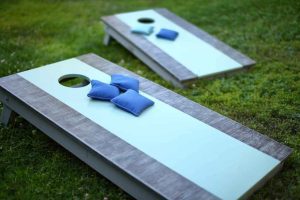 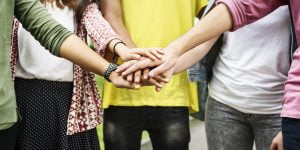 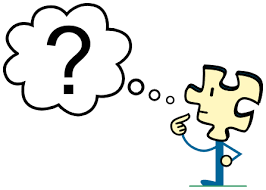 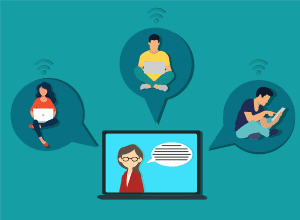 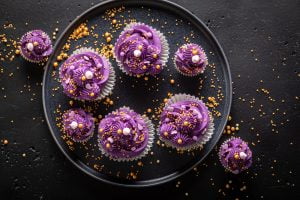 ‘Cake Walk’ Game: Who’s In For A Sweet Prize?